Bundesliga: return date, kick-off times, TV schedule, how and where to watch

The Bundesliga is the first big European league to restart after the coronavirus lockout, with global sports viewers hungry for live football on TV.

The football world shuddered to a halt in March when the Covid-19 virus spread quickly saw leagues across the globe canceling play as a step to stop the virus from spreading.

Two months later and with a number of countries now in a position to ease lockdown, the Bundesliga is the first of the world’s major leagues to confirm a return to action as the 2019/20 season will restart this weekend.

“The German Bundesliga I and II both recommence on Saturday 16 May as Erzbegirge Aue face SV Sandhausen in the second tier at 13:00 CEST with the game set to be the first football in Germany since the halt in March.

“All games in both divisions will be staged behind closed doors as a health measure and all teams and backroom staff have undergone rigorous medical tests leading up to the restart.

“The notorious ‘RevierDerby’ is the top flight opener as Borussia Dortmund face local rivals Schalke 04 with table-topping Bayern Munich in action on Sunday.

“The German top flight can be seen across the world with rights holders offering content across digital and television platforms: 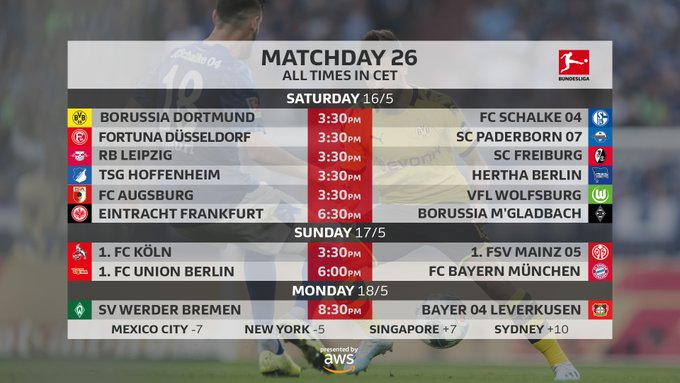 Benzema dumps hopeless PSG out of Champions League with hat-trick

Seven Things You Must Do Before Getting a Divorce In Nigeria

Why You are SAVED AND SPARED | Must Read

Crying all day thinking why such thing happened ? Read This